The major scale is a great way to delve into music theory; many people know what it is but don't understand the theory behind it. However, before we get into it, let's go over the concept of whole steps and half steps:

A half step is the term for the distance of any two notes that are next to one another. For example: F to F#, or A to Ab, or C to B.

A whole step is the term for the distance of any two notes that have exactly one note between them. For example: F to G, or Bb to Ab, or B to C#.

Now a major scale is constructed of the following pattern of whole steps (W) and half steps (H):

This is easy to visualize with a major scale on the piano in the key of C: 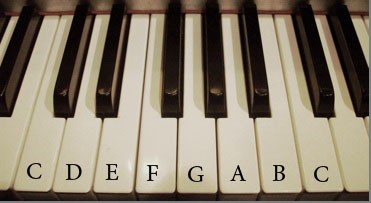 The two half steps in a C major scale occur between E and F and B and C. The black notes are the notes that are in between each whole step. Therefore, on a piano, a C major scale is all white notes.

*Note that regardless of the instrument, in music there is never a note in between E and F or B and C.

Yes there are 12 different notes/keys and each one has it's own major scale. It's very important to be familiar with all 12 major keys. It's a tough project to learn them all and it does help to have the guidance of a teacher or a knowledgeable musician.

To really understand chord theory and harmony, it helps to know the number (also called the scale degree) of each note in the major scale. In the C major scale it is this:

C is the 1st note

D is the 2nd note

E is the 3rd note

F is the 4th note

G is the 5th note

A is the 6th note

B is the 7th note

B is the 4th note

That one is a little trickier. Well go ahead and learn those major scales!

Congratulations, you're now ready for Music Intervals Or if you are looking for more scales, check out the minor scale